Communication is an essential ally in building narratives and giving voice to people and their stories. Learn from the Head of Editorial Content of Vogue Mexico & Latin America how content creation is a transformative agent for cultural heritage. 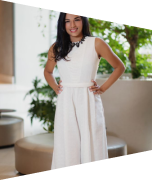 Franchesca Guim was born in Santo Domingo, Dominican Republic, where she graduated in Advertising Communication and worked producing several TV shows. In 2007, after graduating with her master’s degree in Audiovisual Production in Barcelona, she returned to her country and launched her own show “Via Latina.” In 2016, Franchesca joins Telemundo as the Editorial and Social Media Producer for “Mujer de Hoy.” In six years working for the network, she was able to create, plan, and execute content for projects such as “Beautycon” and “Miss Universe” and also represented the company at the “Billboards Awards” and the “Spotify Awards.”

Franchesca enjoys being on-camera and has earned the recognition of colleagues and followers for participating in multiple digital spaces in Telemundo, including “Girl Talk” and “As Seen On IG,” and for interviewing renowned artists such as Juan Luis Guerra, Karol G, and Laura Pausini. Since 2011, she has led her project “Cámara Flash” as content editor and host, interviewing over +100 artists, including Carlos Vives, Ricky Martin, Vicente García, and Pablo Alborán. She has also covered some of the most important international music and entertainment events, such as “Premios 40 Principales” and “Premio Lo Nuestro.” In the meantime she also contributed as a writer for American Airlines “Nexos” Magazine, covering travel and lifestyle topics. Currently, she works as a Social Media Strategist consultant, collaborates as an influencer with major brands, writes for “El Día” newspaper in the Dominican Republic and produces her podcast “En Otro Contexto.”

With a major in Marketing and Business Administration from the University of Arizona, Karla Martínez de Salas started her career as an assistant in Vogue US to later become an Associate Fashion Editor in 2002 and collaborate with recognized publishers such a Grace Coddington, Tonne Goodman, Camilla Nickerson and Phyllis Posnick.

From 2005 to 2010, she was Fashion Director for T Magazine of The New York Times where she learned not only from the fashion industry, but also from the world of interior design, art and travel and, later, she took the Fashion Direction of Interview Magazine where, for a year, she specialized in photography and design to become the Fashion and Accessories Director of W Magazine in 2011.

In 2015, Karla moved to Mexico City with her family, where she started working as a freelance in Cooperativa Shop, an online store based in the United States that specializes in ready-made pieces only by Latin designers. She also collaborated with Armarium World, a website dedicated to rent Fashionable garments and offer styling services.

She became the Editor in Chief for Vogue Mexico and Latin America in June 2016, and since then, she has continued with the exclusive editorial line of the title, where her projects have established new alliances in the market.

Since she has been in charge of Vogue Mexico and Latin America, she has been interviewed many times by major publications such as El Heraldo Mexico and Business of Fashion NY and Spain, where she has explored her expertise as an opinion leader in the direction of the fashion and luxury industry. She has also appeared in television and radio with recognized tv hosts such as Martha Debayle, Eddy Warman, Eddy Smol and Oscar Madrazo where she has shared her achievements and projects during her first year in Vogue Mexico and Latin America.

She was recently included in the BoF US list of the 500 international fashion leaders and since then, Karla has been in charge of the magazine ́s management. Vogue Mexico and Latin America was also awarded with best editorial content for Mexico’s Fashion Digital Awards.

Karla Martínez de Salas is also part of Project Paz, a non-profit organization created 7 years ago, with headquarters in New York and whose goal is to create extracurricular activities for low-income children in Ciudad Juarez, in order to promote peace.